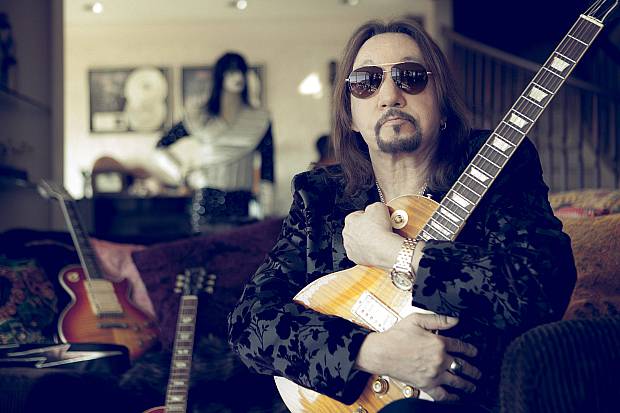 Classic rock hits from the original KISS guitarist and R&R Hall of Fame inductee. The success of Ace Frehley’s solo career, as both a recording artist and performer, has easily outpaced his KISS band mates.

His 2014 release Space Invader was the only post KISS solo album to crack the Top 10 on Billboard’s Top 200 albums chart, and his acclaimed 2011 autobiography No Regrets went on to become a New York Times best-seller.  Ace’s next album, Origins II, is set for a Fall 2020 release and will feature guests Robin Zander (Cheap Trick), Lita Ford, Bruce Kulick and John 5.

With KISS on their farewell tour Ace is in the news just about every day - mentioned in every article referencing KISS as the original lead guitarist with most writers commenting that KISS is not the same without Ace.

Here is what Rolling Stone had to say on the topic - https://www.rollingstone.com/music/music-news/kiss-farewell-tour-wish-list-ace-frehley-peter-criss-747897/

Here are a few things you probably know about Ace Frehley: He’s the original lead guitarist for KISS (which he co-founded in 1973). He was also their best—his song-within-the-song guitar solos are as much a part of KISS as the band’s seven-inch platform boots. And he’s always been the coolest member of KISS—rock ’n’ roll swagger, laid-back, mysterious—just ask Tom Morello of Rage Against The Machine, or Naoko Yamano of Shonen Knife, or Abbath of Immortal. Hell, even people who don’t like KISS still love Ace.

What you may not know is that Ace Frehley has not been a member of KISS since 2002, when he left his second tenure with the band (there’s a “spaceman” currently playing leads for the band, but it ain’t Ace). In his time away from KISS (1983-1996, and 2002-present), Frehley has put together the most successful solo career of any member—current or former.

And Ace is on a roll. He’s ready to embark on his next musical journey with ​Spaceman,​ his third solo outing in four years. Of all Ace’s post-KISS recorded output, ​Spaceman​ might be the closest link to his widely acclaimed 1978 solo record, both in spirit and execution. First off, Frehley played all of the guitar parts on ​Spaceman​, as well as bass on all but two songs. Longtime drummer Anton Fig, whose friendship with Ace began in that 1978 record, also appears on “Off My Back” and “Pursuit of Rock and Roll” (longtime collaborators Scot Coogan and Matt Starr also play drums on ​Spaceman​).

There’s also a thematic, almost biographical, thread running through the album of a long life in rock ’n’ roll, although Ace admits it wasn’t intentional. The first single “Bronx Boy” lays out Ace’s pre-KISS roots, running wild with an Irish street gang called the Ducky Boys. It might be his grittiest song to date, with an opening riff that lashes out like a switchblade.

“Pursuit of Rock and Roll” ticks off a list of rockers that made Ace who he is, including Little Richard and the Stones. Frehley also makes it clear that rock is truly all he needs: “So sick of looking at reality TV / and like the Beatles said, you gotta ‘Let It Be.’”

Ace’s cover of Eddie Money’s “I Wanna Go Back” gives the song a ripping power pop makeover. It was chosen for the record by Ace himself. “I was laying in bed with Rachael (Gordon) watching YouTube videos, and that song came on. I told her I was gonna cover it. It’s about me.”

“No need to worry, I’ll be home soon, ’cause I’m rockin’ with the boys,” Frehley sings on “Rockin’ With the Boys,” which tells the tales of life on the road. Ace says he wrote the original version of the song back in KISS’s heyday in the ’70s—if you listen closely, it could almost be seen as a rockin’ counterpart to the Peter Criss-penned KISS classic “Beth.”

Speaking of KISS brethren, let’s get back to those two songs on Spaceman​ that Ace didn’t play bass on. One listen of opener “Without You I’m Nothing” should be a dead giveaway. That mighty dinosaur growl of a bass tone belongs to Gene Simmons, who co-wrote that song, along with “Your Wish Is My Command,” with the Space Ace at Frehley’s home studio in Rancho Santa Fe, California.

Ace recalls a relaxed three hours of hanging out, writing songs, and eating sandwiches with Simmons, who roomed with him back in the KISS daze. A lot of barbs have been thrown by both over the past couple of decades, but there’s still a mutual love for one another, made clear during Ace’s recent stints on Simmons’ Vault Experience.

His reconnection with Simmons and fellow KISS vocalist-guitarist Paul Stanley (who joined Ace on a cover of Free’s “Fire and Water” for 2016’s covers LP ​Origins, Vol. 1​) might be chalked up to the fact that Frehley has been sober for more than a decade (he celebrated 12 years of sobriety in September). Ace’s clean living no doubt has a lot to do with his productive streak, which began with the release of his top 20 Anomaly a​ lbum in 2009, his top 10 Space Invader LP in 2014 (a first forany​ KISS member); and continues with ​Spaceman​ (a title suggested by Gene himself).

Spaceman​ is a lean-and-mean nine tracks, and includes what has become a trademark for any Ace joint, a cosmic instrumental. “Quantum Flux” is a classic prog ’n’ roll song from Frehley, with lush acoustics and twin-leads. Fans might also notice the song’s doomy outro, which nods to “Black Diamond” on KISS’s 1974 debut.

Along with writing and recording new material, Ace has also been tirelessly hitting the road, playing festivals, as well as dates stateside and in Australia and Japan (including dates with the mighty Alice Cooper). As always, Ace is traveling at an altitude us mere mortals will never understand—a life lived to the fullest, and one that has defied... well, everything. That said, if you ever see the Space Ace in the cosmos, there’s only one proper reaction: “Hey look, it’s rock ’n’ roll!”

Booking rest of the world: kevin@nstarartists.com