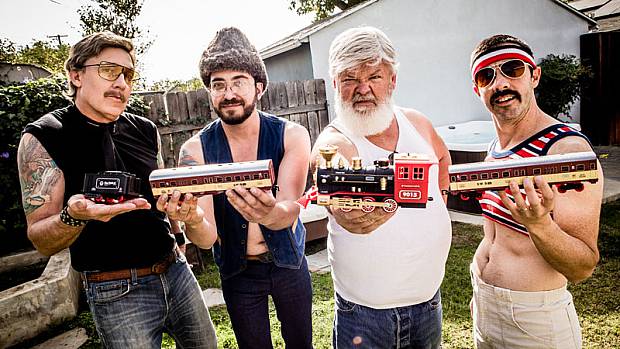 If Lynyrd Skynyrd, The Allman Brothers and Spinal Tap engaged in a cream-dream battle royale that exploded into a cage match/orgy o’ sorts- what would eventually emerge from the many varieties of smoke would be that event’s offspring- TRAINWRECK. Southern rock inspired costumed characters whose classic/prog/boogie rock, guitar-rich songs of man, woman, mirth and merriment oft-tend to happy-melt faces and aurally tickle ear-souls.

After a brief stint as a duo, TW first hit the tracks with its full line-up form in 2004 when Klip and Darryl gigged in Ohio and were introduced to BJ and Shredman, whereafter it was on like Donkey Kong Country. These brother-hubbards toured the States in 2004-2005 with their first EP: 2 WRECK-N-ROLL TRACKS. They appeared as the musical guest on JIMMY KIMMEL LIVE in 2004. Also guest hosted on Al Gore’s CURRENT TV network for Halloween 2005. They have toured as support with VIDA BLUE, THE REVEREND HORTON HEAT, PHANTOM PLANET and THE SUPERSUCKERS. Played festivals such as MOE DOWN, and San Diego’s 91X FEST. Internationally they have played gigs in New Zealand, Australia, and the UK. They released TRAINWRECK LIVE (Sony/Epic) in 2004, a 5-TRACK EP in 2006 and then their full-length album THE WRECKONING in 2009. Videos for TIM BLANKENSHIP and BRODEO were released in 2009/2010. Trainwreck then fully experienced their moniker after a mad shitty 2010 gig in Chicago, when the band imploded into irreparable carnage. Fast-forward 8 years after much soul searching, mountain top revelations, sensory-deprivation float tanks, and Darryl’s tiger blood extraction therapy, when the band reunited with the undeniable pull of magnet coils back towards their similarly manufactured coil-bros. TW did The PACIFIC REUNION TOUR in Fall, 2018 taking the band through 9 CA cities. They performed at THE LEBOWSKI FEST in Spring 2019 at The Wiltern in Los Angeles. They’re currently recording a 12-track studio album with producer JOHN SPIKER, slated to be released in early 2022. There is also a feature-length mockumentary film in the works which will weave many of the tracks from the new album amongst the story of the band reuniting in a fierce battle to win back their band name from some modern bubblegum music d-bags, posers, wanna-be-... stay tunethed.