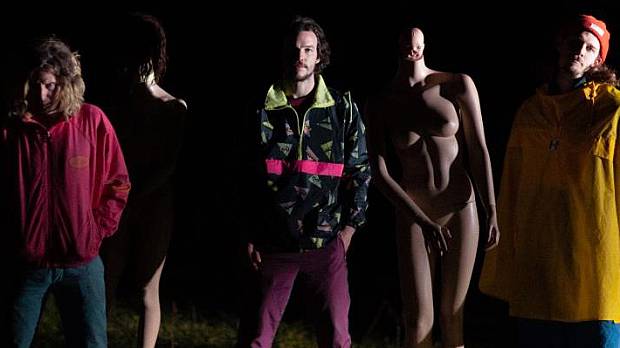 The forthcoming fifth album by the international phenomenon that is Mother’s Cake sees the psych-rock trio present itself in suitably appropriate fashion: sky high, far out yet still very much down to earth. In preparation for over a year and recorded during a series of sleep-deprived three day sessions, the group concentrate on the essentials on the ten new songs that comprise ‘Cyberfunk!’, bundling their raw live energy into a dynamically dense release that sounds like vintage madness of the best possible kind and fits the moment in perfect fashion.

Despite what its title might suggest, ‘Cyberfunk!’ was created in a more or less classic manner, with the three musicians performing together in one room, just the way it should be, with a minimum of overdubs resulting in a genuine band sound that is almost distilled to its essence, with the voice of singer/guitarist Yves Krismer standing out even more than on the band’s previous recordings.

The career trajectory of Mother’s Cake’s has seen them play hundreds of concerts from Manchester to Melbourne and Mumbai, including shows with Wolfmother, Iggy & The Stooges, Omar Rodriguez-López, Alice In Chains and Limp Bizkit. They have also released three successful studio albums plus a near-megalomaniacal (in the best possuble sense) ‘Live at Pompeii’-style live set recorded on the ski jump in Bergisel, Austria in 2018. “Over the past year, we have created a pool of new song ideas, just like we used to do when the first songs were created twelve years ago while jamming in the rehearsal room,” explains drummer Jan Haussels.“Yves was then able to cherry-pick and finalise two or three songs for the later recordings. But, it was always intended that new songs could be added at short notice. For Benni [bass player Benedikt Trenkwalder] and myself, what we were recording was often spontaneous, which has the added benefit of more of a snapshot feel and less highbrow ideas.” Having said this, the recording sound had to be just so and even to find the right tempo for a Mother’s Cake song can take several takes. “We listen to them and decide on a case-by-case basis – usually the ones we put on the album are the ones we play at ease because we think: ‘that’s a wrap’, continues Haussels.

The production of the album was a collaboration in the best sense of the word, with Raphael Neikes and Manuel Renner from Studio Ueberlärm in Mannheim, Germany and Krismer playing key roles. Together they spun and spanned the tension of ‘Cyberfunk!’ – from the psychedelic ‘Crystals In The Sky’, with its half-time verses, heavenly harmony choruses, devilish riffs and a horizon full of delay, to the intense ‘Toxic Brother’, the appropriately titled ‘The Beetle’ (a potential favourite song of Paul McCartney’s rocking soul brother circa 1969, perhaps), plus the deep swamp groove of ‘Love Your Smell’, the dramatic ode to ‘Gloria’ (not a cover?) and the new wave funk rock of ‘Hit On Ur Girl’, which unwinds into a sweet folk song towards its conclusion. “The flow of the album has come about in the process of making it,” state the band. “However, after some of the songs were finished, it was a very conscious decision as to which belonged where. Yves thinks very carefully about this and likes to create surprises from song to song, so some were deliberately written in one direction to fit the appropriate spot.” The end result is ‘Cyberfunk!’, in the best sense of the word….exactly the rock album Mother’s Cake had to record at this point in their career – and one that we need to hear right now. 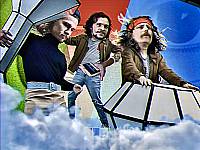